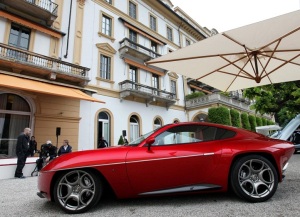 Albeit a bit late, I’d like to get back to the Villa d’Este Concorso d’Eleganza, held from May 24th to 26th. By referendum at Villa Erba the public granted the Concorso d’Eleganza Design Award for Concept Cars & Prototypes to the Disco Volante 2013 by Touring Superleggera.

In science fiction movies flying saucers (disco volante in Italian) always make a faint and high humming sound. The latest creation of Touring, inspired by the Alfa Romeo 1900 C52 from 1952, attracted all the attention, not by flying but with its loud and exciting voice. It’s the engine from the Alfa Romeo 8C Competizione. More precisely: the Disco Volante is a rebodied 8C.  Read more.

Also see these pictures, showing the Disco Volante in the company of an adopted sister: the Alfa Romeo TZ3 Stradale wich is in fact a Dodge Viper in disguise.